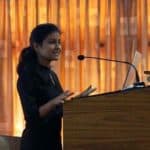 The Python implementation presented may be found in the Kite repository on Github.

The Artificial Neural Network (ANN) is an attempt at modeling the information processing capabilities of the biological nervous system. The human body is made up of trillions of cells, and the nervous system cells – called neurons – are specialized to carry “messages” through an electrochemical process. The nodes in ANN are equivalent to those of our neurons, whose nodes are connected to each other by Synaptic Weights (or simply weights)  – equivalent to the synaptic connections between axons and dendrites of the biological neuron.

Let’s think of a scenario where you’re teaching a toddler how to identify different kinds of animals. You know that they can’t simply identify any animal using basic characteristics like a color range and a pattern: just because an animal is within a range of colors and has black vertical stripes and a slightly elliptical shape doesn’t automatically make it a tiger.

Instead, you should show them many different pictures, and then teach the toddler to identify those features in the picture on their own, hopefully without much of a conscious effort. This specific ability of the human brain to identify features and memorize associations is what inspired the emergence of ANNs.

What is an Artificial Neural Network?

In simple terms, an artificial neural network is a set of connected input and output units in which each connection has an associated weight. During the learning phase, the network learns by adjusting the weights in order to be able to predict the correct class label of the input tuples. Neural network learning is also referred to as connectionist learning, referencing the connections between the nodes. In order to fully understand how the artificial neural networks work, let’s first look at some early design approaches.

What can an Artificial Neural Network do?

Today, instead of designing a standardized solutions to general problems, we focus on providing a personalized, customized solution to specific situations. For instance, when you log in to any e-commerce website, it’ll provide you with personalized product recommendations based on your previous purchase, items on your wishlist, most frequently clicked items, and so on.

The platform is essentially analyzing the user’s behavior pattern and then recommending the solution accordingly; solutions like these can be effectively designed using Artificial Neural Networks.

ANNs have been successfully applied in wide range of domains such as:

The McCulloch-Pitts model of Neuron (1943 model)

This function f which is also referred to as an activation function or transfer function is depicted in the figure below, where T stands for the threshold. 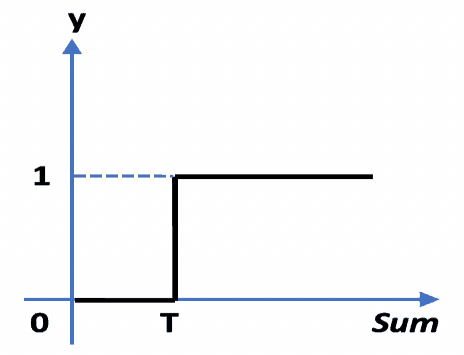 The figure below depicts the overall McCulloch-Pitts Model of Neuron.

Let’s start by designing the simplest Artificial Neural Network that can mimic the basic logic gates. On the left side, you can see the mathematical implementation of a basic logic gate, and on the right-side, the same logic is implemented by allocating appropriate weights to the neural network.

Similarly, you can try any different combination of weights and thresholds to design the neural network depicting AND gate and NOT gate as shown below. 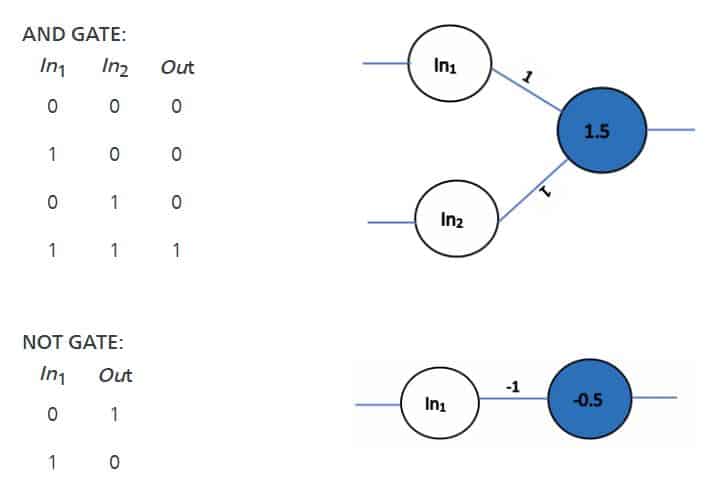 This way, the McCulloch-Pitts model demonstrates that networks of these neurons could, in principle, compute any arithmetic or logical function.

This is the simplest type of neural network that helps with linear (or binary) classifications of data. The figure below shows the linearly separable data. 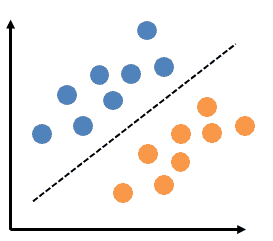 The learning rule for training the neural network was first introduced with this model. In addition to the variable weight values, the perceptron added an extra input that represents bias. Thus, the equation 1 was modified as follows:

Bias is used to adjust the output of the neuron along with the weighted sum of the inputs. It’s just like the intercept added in a linear equation. 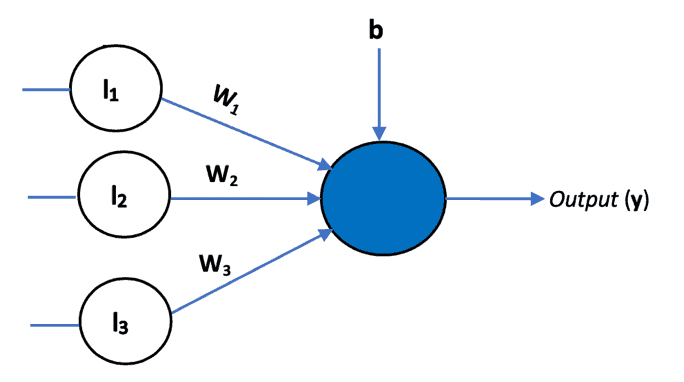 A perceptron that as a single layer of weights can only help in linear or binary data classifications. What if the input data is not linearly separable, as shown in figure below? 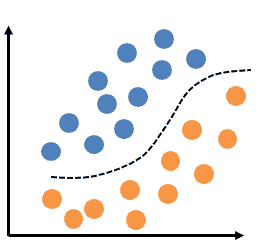 This is when we use a multilayer perceptron with a non-linear activation function such as sigmoid. 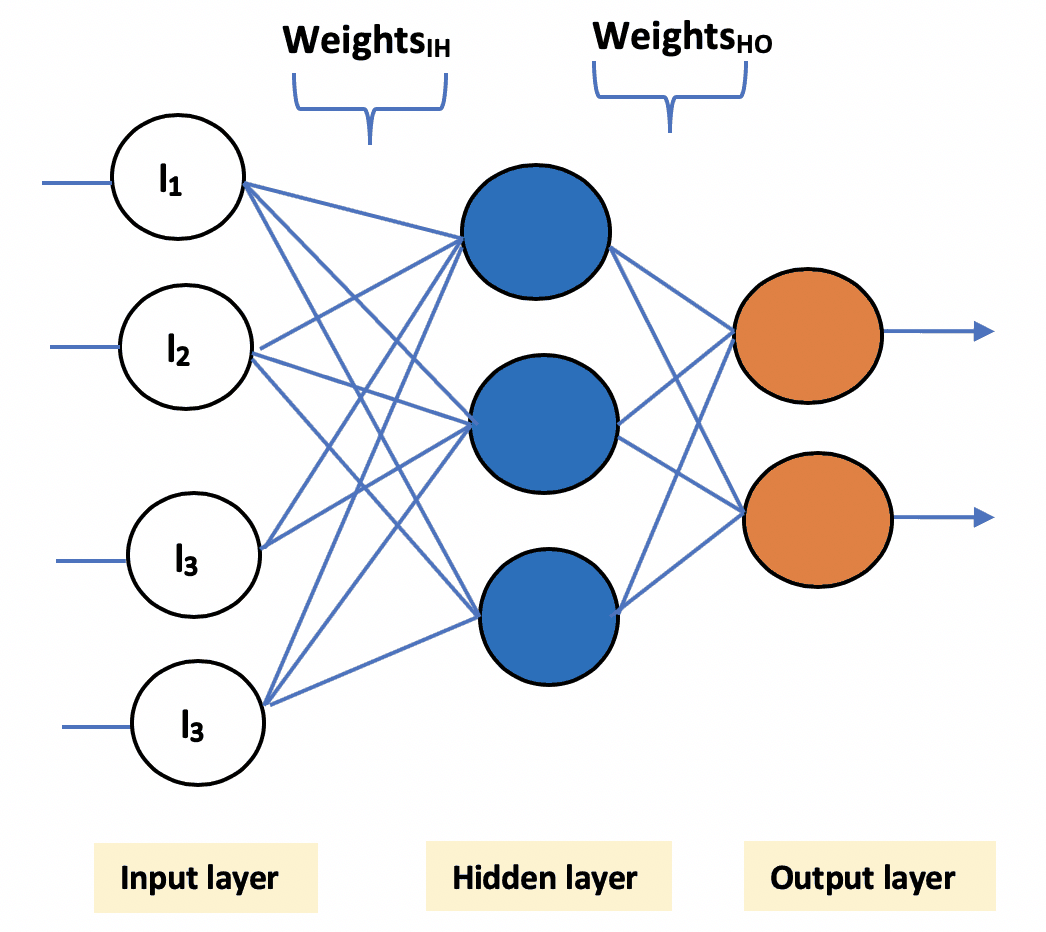 Now that we’ve discussed the basic architecture of a neural network, let’s understand how these networks are trained.

Training phase of a neural network

Training a neural network is quite similar to teaching a toddler how to walk. In the beginning, when she is first trying to learn, she’ll naturally make mistakes as she learns to stand on her feet and walk gracefully.

Similarly, in the initial phase of training, neural networks tend to make a lot of mistakes. Initially, the predicted output could be stunningly different from the expected output. This difference in predicted and expected outputs is termed as an ‘error’.

The entire goal of training a neural network is to minimize this error by adjusting its weights.

In this step, the weighted sum of input values is calculated, and the result is passed to an activation function – say, a sigmoid activation function – which squeezes the sum value to a particular range (in this case, between 0 to 1), further adding bias with it. This decides whether a neuron should be activated or not. 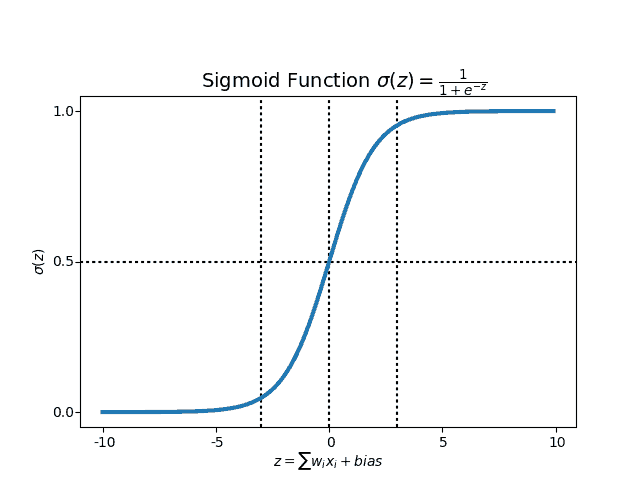 For neuron j (also referred to as unit j) of the output layer, the error is computed as follows:

Where Tj is the expected output, Oj is the predicted output and Oj *(1 – Oj) is the derivative of sigmoid function.

The weights and biases are updated to reflect the back propagated error.

We terminate the training process when our model’s predicted output is almost same as the expected output. Steps 2 and 3 are repeated until one of the following terminating conditions is met:

So, let’s create a simple interface that allows us to run the training process:

Bringing it all together

Finally, we can train the network and see the results using the simple interface created above. You’ll find the complete code in the Kite repository.

You now have seen a sneak peek into Artificial Neural Networks! Although the mathematics behind training a neural network might have seemed a little intimidating at the beginning, you can now see how easy it is to implement them using Python.

In this post, we’ve learned some of the fundamental correlations between the logic gates and the basic neural network. We’ve also looked into the Perceptron model and the different components of a multilayer perceptron.

In my upcoming post, I’m going to talk about different types of artificial neural networks and how they can be used in your day-to-day applications. Python is well known for its rich set of libraries like Keras, Scikit-learn, and Pandas to name a few – which abstracts out the intricacies involved in data manipulation, model building, training the model, etc. We shall be seeing how to use these libraries to build some of the cool applications. This post is an introduction to some of the basic concepts involved in building these models before we dive into using libraries.

The best way of learning is by trying it out on your own, so here are some questions you can try answering using the concepts we learned in this post: